This is a game that sneaks up on you.  It greets you with a warm friendly smile, a cheesy plot, and a feeling that you’re in safe, predictable hands.  But underneath the hood is an engine that means everything you do is significant.  One More Island is a game where the consequences of your decisions will surprise you, as it invites you to be far more creative than most games in the genre will allow.

Near the beginning of the tutorial, I started to think that something was up.  It told me “Your worker will get to work and put Fish in the Barrel. From there it will be picked up by other workers that aren’t assigned to a Zone.”  This worried me: I’d placed the barrel a long way from everything else, and I got the feeling that I should have played it differently, put the barrel where it was easy to access.  Being an absolute perfectionist less than five minutes into the game, I restarted it (I didn’t learn that you could click on the barrel and select ‘move’ until much later).  This put me onto a freshly-generated map.  Something was definitely up!

If fish are friends, why are we eating them?

As you’d expect from a good city builder, that place wasn’t looking quite the same by the time I got to writing this review.  Expansions to the road network, new manufacturing facilities, and a constant demand for even more fish saw the harbour grow significantly. 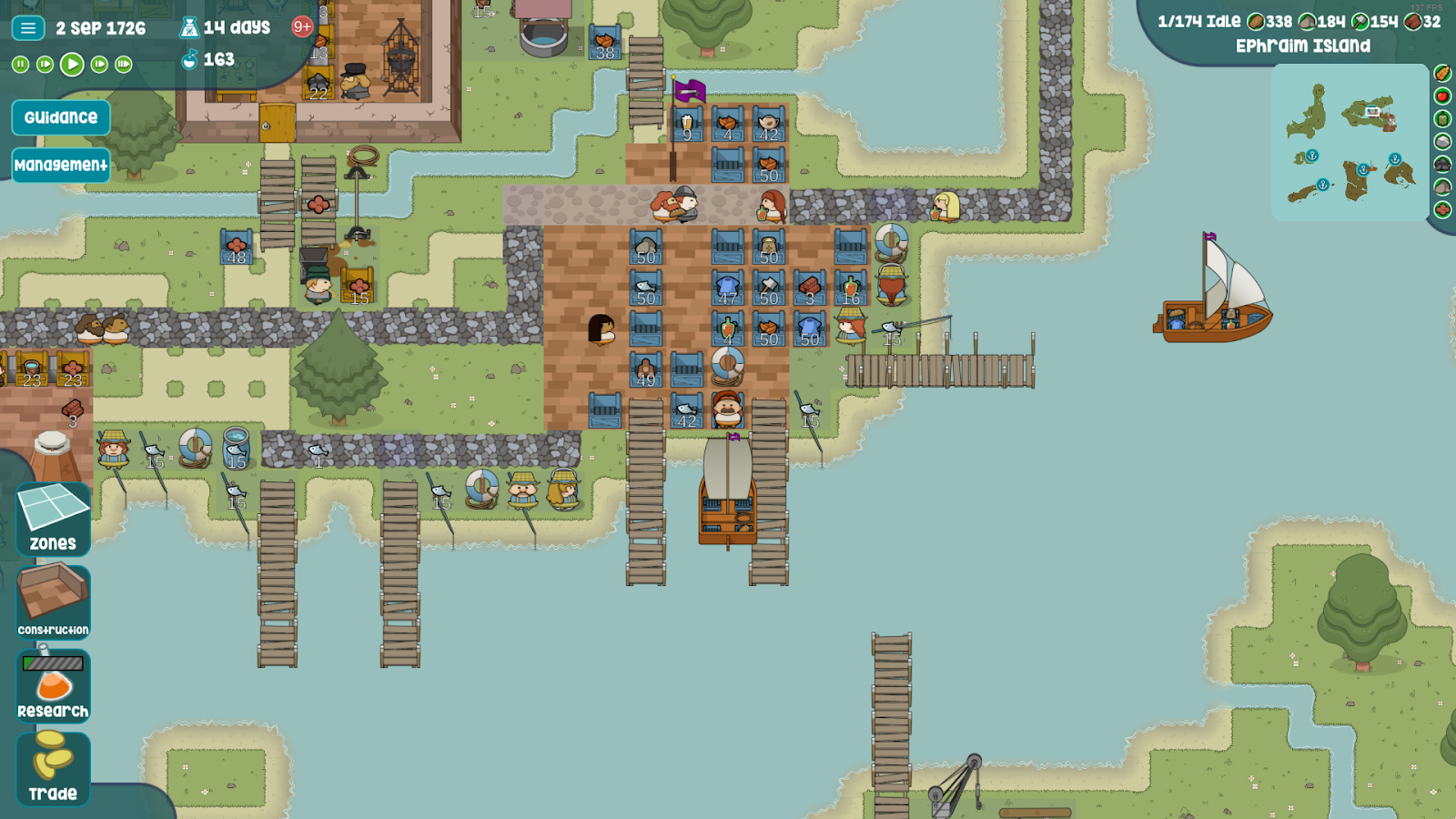 If you look closely, you can see that the first barrel, fishing rod and life ring are still in the same place.  But the flagpole was annoying me, and I moved it to the other side of the street.

Speaking of growth, I like to think that I’m pretty good at planning ahead, and also at making the best use of the available space.  And so when it came to finding a place to put the windmill, I put it next to the wheat field.  Where else was I going to put it?

It seemed like a good idea at the time.

And while I was building everything on the North side of the bay, I didn’t think much about how the windmill was blocking that little bit of land between the coastline and the cliffs.  But by the time I was building a shipyard, there just weren’t any good locations on the North side.  Which meant (now that bridges were unlocked) that the access I had sealed off was now something I wanted to use.  And in a great many games, what I’d be doing at this point was deleting the building and rebuilding somewhere else.  However, the level of customization available is something you won’t see in most city builders.

Rimworld offers a similar level of control over your buildings, but it’s kinda stressful to look at, and very very brown.  I’ll take my city-building without the side-order of cannibalism; if that’s OK?

Buildings don’t have to be rectangles.

The Southern Superfield isn’t just a wheat field: to the North, it connects with a pair of windmills that deliver flour to a pair of bread ovens, without the courier having to leave the building!  To the east, a gate leads directly to the feeding trough for the sheep.  Rather than having to use a gate to deliver wool to the other side of the city, a door leads directly to a weaver’s house that contains two spinning wheels (with room for a third, since demand will definitely keep growing).

When the working day begins in the One More Island development offices in Europe, the discord account of “Tom (lead dev)” starts catching up with messages and replying to people.  And Tom is awesome.

Anyone who responds to a user suggestion at the start of their day  “Great idea!  We’ll do that,” is pretty cool.  But to follow up the next day and say “It’s coded, but it didn’t make it into the patch we’re releasing today because we want to test it first, it should come out in the next patch after”?  That is some next-level community involvement.

Yesterday, I suffered a pretty serious heartbreak – I had idle workers on one of my islands, but I couldn’t get anyone to work in some of my buildings, despite all of the necessary items being in place.  This meant it was impossible for me to make progress in the game, because that was the only place where I could make tea.  And with the Queen sending arsonists to destroy my buildings in retaliation for unpaid taxes (we’ll get to that), I needed to be able to make tea.

I opened a ticket, uploaded a save file, and left a note stressing the importance of fixing this bug.  (I nearly added a note saying “I’m writing a review of this game, so treat me like a VIP!” but I didn’t want to be ‘that guy’.)  I don’t think had Tom had been at work for half an hour before he replied with an annotated screenshot of my worker statistics, showing that I had set all of my workers to ‘courier’, which mean they couldn’t be allocated to work in a building.  He also noted that the error message I’d been getting was confusing, and that he’d see about rewording it.

Where has the “Open savegame folder” button been all my life?  And why doesn’t every other game in the entire world have this button?

A critique of colonialism?

(In this section, I’m going to gloss over the fact that I’ve started chopping down trees because ‘they obstruct my view of the flow of goods’, and focus on my relationship with the Queen.  Because self-reflection makes me sad.)

One of the first things you’ll notice in One More Island is that the Queen isn’t very nice.  It’s pretty clear that the voice actress playing her had a great time being mean, and she’s helped by a game design that doesn’t so much invite you to hate the queen, as demands it from you.

She’s easy enough to ignore until act three, when the game unlocks the ‘disasters’ feature.  Up until that point, you don’t have to worry about things spontaneously going wrong in your buildings (although weather can knock out your crops from time to time).  But once your colony has been making sausages and tea for a while, she stops being a mildly disinterested supporter, and she turns into an investor who wants to be repaid for setting you up on that island in the first place.

Do you really think trashing the colony is going to help us pay the taxes we can’t afford?

The very last unlock in the tech tree is ‘declare independence’, and I begin to see why.  Between sinking my ships, kidnapping my workers and setting fire to my buildings, this woman is seriously getting on my nerves.  But she’s not just randomly annoying: the game is quite clear that she sets the taxes based on the population of the colony.  Which means that the easiest and most obvious approach to solving all your problems (‘just add more workers’) becomes increasingly unsustainable.  Especially since workers consume the same resources that you have to pay the queen for your taxes.

There’s a whole ‘population management’ layer of strategy to this game that I don’t fully understand yet, and it’s intriguing. Because every worker needs a certain resource tier in order to survive, but they will consume items from the tier above if they’re available, generating research points in the process.  Research points are used to unlock the next tier of resources, and you get a bunch of buildings that can only be operated by workers one tier higher.

This is actually really neat and really clever: by the time you unlock tier 2 buildings, you already have a workforce who have consumed a whole bunch of tier 2 food resources, which means that you’re ready to make use of those buildings as soon as they become available.  It also addresses a common problem in city-builders generally, which is that there’s typically a weird patch just before (or just after) unlocking some tech, where you either can’t do anything useful, or suddenly feel cast adrift, unable to do anything useful or meaningful.

In One More Island, the investment you make in generating as many research points as you can is also an investment in having a workforce and manufacturing infrastructure that is ready for the next stage. And when you’re laying down your awesome new buildings, you’ve already got a supporting infrastructure for them.

But if you’re growing wheat on one island, and growing cotton on a different island, where should you raise the cows so that the leather and the cotton can come together and make fancy clothes?  And is it better to reuse the cargo slots in your ships for different types of goods, or is the risk that crews will throw the cargo overboard to make room unacceptable?

And then there’s the fact that the game doesn’t come with all the charts you’d get from an Enterprise Resource Planning suite.  And that you can’t actually say “A cider press produces 4.6 units of cider per minute” in this game, because it depends on how you laid out the building with the cider press inside, and how long it takes the cider press workers to go to the market when it’s time for lunch.

Making use of the information from the ledger screen is an artform in its own right.  With so many apples lying on the ground underneath apple trees, do I actually have a shortfall in apple production, or is something else going on?

It’s clear from the Steam reviews that there’s a group of people who just don’t get into One More Island, and there’s another group of people who are absolutely passionately in love with it.  Indeed, one of the things I look for on Steam is games where there’s reviewers saying “This game is impossible and I hate it” and other reviewers saying “This game is great, you just need to understand it.” Because I enjoy the journey from ‘not getting it’ to ‘getting it’, and I have a tendency to walk away from a game once I feel like I fully understand it.

Which is why I’m feeling especially embarrassed about sending the developers a note saying “Your game is broken” when the reality (as Tom very diplomatically showed me) was that I hadn’t understood what was happening. 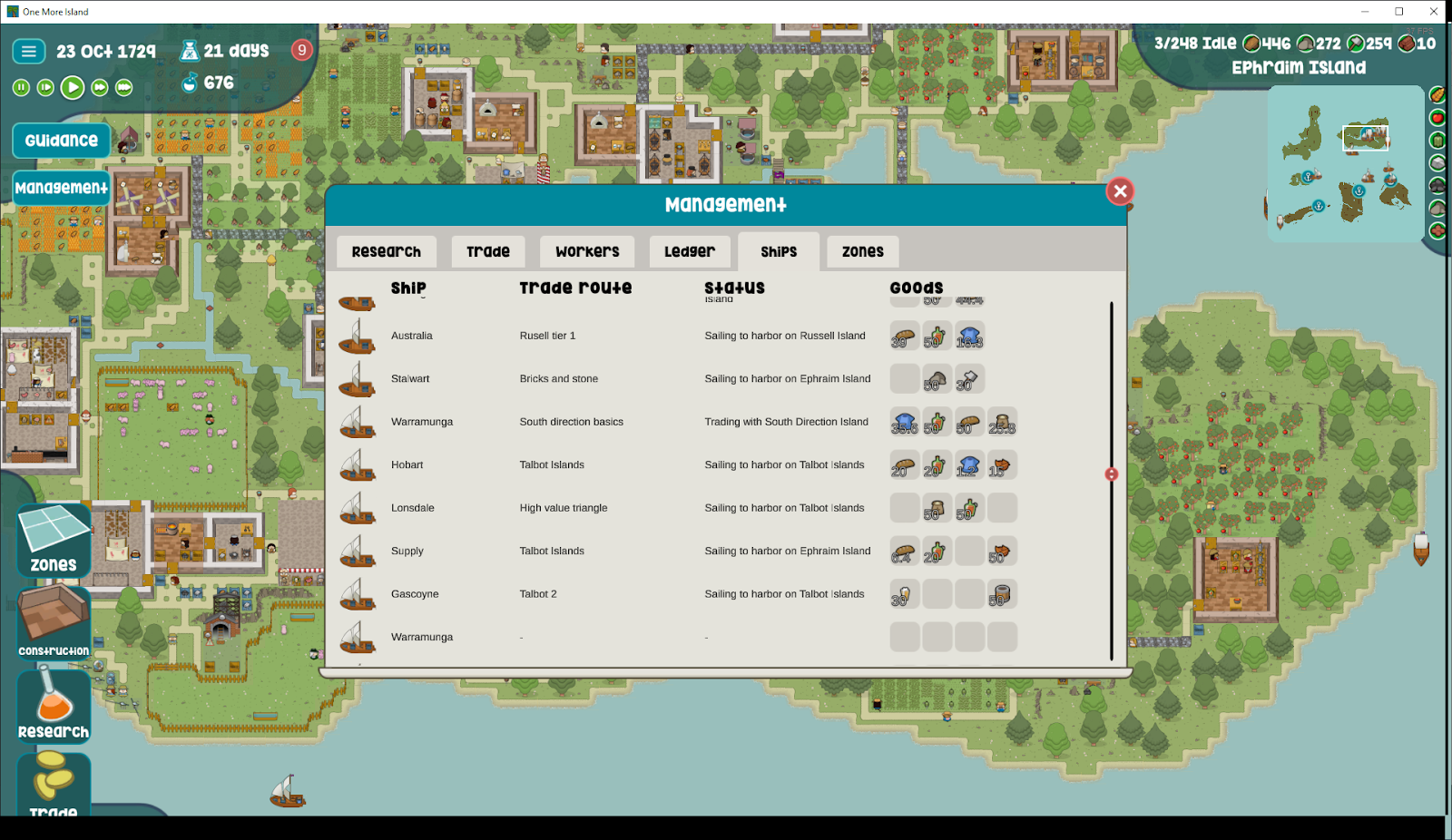 The ships screen gives you a really clear picture of what your ships are doing.

One More Island is fundamentally a performance optimization puzzle.  All the information you need to solve the puzzle (from apples lying on the ground, to people dying of thirst because they can’t get a bottle of cider) is there, and if you follow the evidence trail, you’ll find the answer.

It’s the kind of game that I love, the kind that fills my entire brain with a challenging problem, and allows me to make gradual progress towards the goal that is clear and visible at every step of the way.  It’s also a game that was released three days ago: there have been two crashes in 16 hours of play, and there’s at least one badly-worded error message.  If you want a perfectly polished, smooth experience where it’s clear what you should be doing at every step of the way, then you should go back to playing Anno 1800.  Me, I’ll be telling MGN that One More Island needs a bunch of strategy guides for people who want to be really good at it, and that I know a writer who would enjoy the assignment.

We ARE gamers. We work with games we really love and believe in. We share our partners passion in driving discoverability for these experiences.